Accident-diagram.com is a modular build. You just drag the single elements onto the drawing area. Start with the roads. Compile several elements to a surface that approaches to the actual location. Now add elements from the toolbox that has lines, squares, arrows, skid marks and text boxes in it. Look for a matching vehicle, change the color and label the license plate. Below is an accident scenario to get you started. 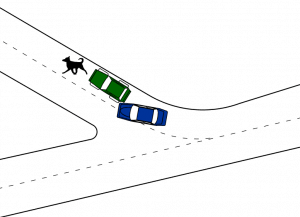 Scenario: Rear-End Accidents
In a rear-end accident, two vehicles are typically traveling or pointed in the same direction when the vehicle behind hits the back of the vehicle in front. Rear-end accidents may happen at traffic lights or stop signs makeessay or while both vehicles are moving in traffic. In most rear-end accidents, the driver of the tailing vehicle is the one at fault due to what’s known as the “safe following distance” rule. This rule requires drivers to leave enough space between their own vehicle and the one ahead to allow for a safe stop, even in an emergency or when roads are slippery. Rear-end collisions are typically seen as evidence that the following driver failed to obey the “safe following distance” rule — the logic being that if the rule had been observed in the first place, no collision would have happened. However, in some rear-end accidents, the lead driver may be at fault. This situation may occur when the lead driver cuts in front of the following driver too closely for the following driver to prevent a collision, or when the lead driver accidentally puts his or her vehicle in reverse and backs into the following driver. The scenario above depicts a driver who has been hit from behind after slowing to stop for an animal in the road.

Click here to view a tutorial demonstrating the ease of the Accident-Diagram tool.